Sam Irwin is a multimedia artist and composer from New York City. He graduated from Bennington College with a Bachelor’s degree in visual arts and music. He has worked with the Martha Graham Company, the Marie Christian Giordano Dance Company, and MoMa PS1, among others. In his works he uses programming to create interactive performances, projections, and instruments. 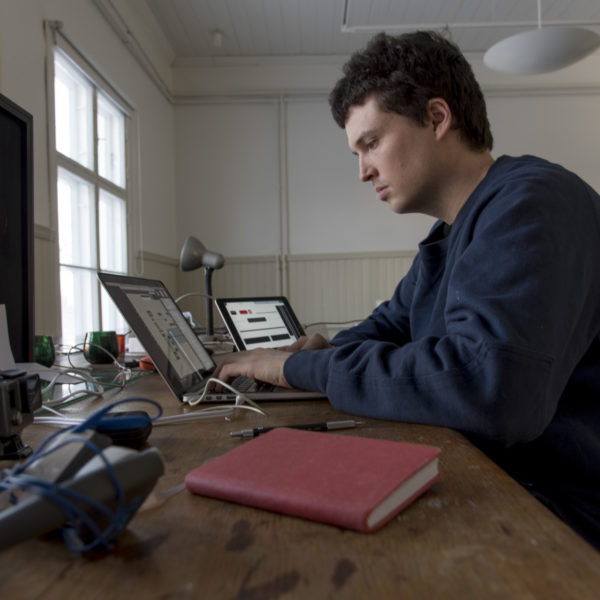 Turkish artists returned to Ii to create Dream News with the participants of the Lähde! project!

Jaqs's work is born from the debate and the exchange between the action of randomness and the physical manipulation of human reasoning and its aesthetic, intuitive and communicative perception.

The visual expression of Spanish painter and photographer Hugo González Aroca arises from the balance between opposites.

Klara Bergman Fröberg is a Swedish visual artist, who was Artist-in-Residence at KulttuuriKauppila Art Centre as part of the Lähde! Empowering daily life with art -project and artist exchange arranged in partnership with Konst i Halland.

Canadian multidisciplinary artist Émilie Payeur developed during her residency period a sound performance based on her experience of the influence of weather and other changes in the surrounding forests.

The work of Kevin Ling concerns community relationships, connection and a sense of curiosity.

During her KulttuuriKauppila Artist-in-Community residency period, Japanese composer and pianist Makiko Nishikaze is working on her project, Listening in Ii in collaboration with the residents of the Startti group home belonging to the Oulunkaari joint authority.

Through his KulttuuriKauppila Artist-in-Community residency period, Finnish visual and media artist Tuomo Kangasmaa aims to highlight the importance of personal experience, and to create space for multisensory experiencing of the environment.

Recidency artist of February Min Yoon from USA studied the identities of people from Ii for the performance Inner Mirror.

Räsänen and Alekseevna will develop an interactive audiovisual installation at KulttuuriKauppila Art Centre!

A big smile greets the customers of the Pudasjärvi library. The smile belongs to Hilma, an artwork created in the KK AIC program by artist Miia Kettunen and the local team!

The Suitcase radio gives voice to the mental health recuperators and the staff working with them. The completely self built Suitcase radio is the outcome of the social art residency (KK AIC) period of the artist Jaap Klevering.

Alberto Pina was inspired by the Finnish forest!

Brenda Petays was examining "becoming Finnish" during her residency period.

Cheryl J. Fish introduced the American literature to the locals!

María Platero is a Spanish photographer who led us to an art walk and a picnic!

THE KOKRA FAMILY makes visual documentations of wonderment about what you are looking at and why in that specific configuration.

Tina Mariane Krogh Madsen and Malte Steiner are artists from Denmark and Germany who specialize in media art and electronical music.

Maja Ingerslev is a visual artist who works with staged photography, video and papercut installations.

Touko Hujanen, born in 1986, is a freelance photographer specialising in reportage.

Yuna Cho, born in 1993, is a Korean-Canadian artist and drawing and painting instructor currently living and working in Seoul, South Korea.

Antti Leino, born in 1976, is a freelance photographer based in Turku, Finland. He has been a professional photographer since 2016.

Leah Beeferman is an artist from New York City, and she was in Finland during 2016-2017 on a Fulbright Scholar Grant.

Ivana Radovanovic, born in 1983, is visual artist living in Podgorica and working in Cetinje in Montenegro.

The Japanese artist Masami Aihara, born in 1961, lives on the Japanese island of Hokkaido.

Aki-Pekka Sinikoski is known as a versatile portrait photographer whose work has been exhibited both in Finland and abroad.

Carola Grahn, born in 1982, is of South Sámi descent. She grew up in Jokkmokk and received a master’s degree in fine arts from the Royal Institute of Art in Sweden in 2013.

Anders Sunna, born in 1985, grew up in Kiruna. He lives and works in Jokkmokk, Sweden.

Emma Wippermann is a writer based in NYC. She works in text and images, often incorporating smartphone photos and screenshots into her writing, which is primarily concerned with ecology, desire, and queer digital intimacy.

Iryna Vorona, born in 1987, is an artist born and working in Ukraine.

Anna Yamanishi’s master’s degree is from the Kyoto City University of Arts and she has presented her works in Japan both in solo and group exhibitions.

Trained as a historian, Ruth Timmermans started as a researcher at the University of Leuven in Belgium, studying gender, trade-unions and colonialism.

The visual artist Emily Little was born in Paraparaumu, New Zealand, and she studied in Scotland, graduating from Edinburgh College of Arts. She currently lives and works in Rome.